How to Deploy a Next.Js App to AWS ECS with HashiCorp Waypoint

Last week HashiCorp launched its latest open source project, Waypoint. Waypoint is a tool to streamline the build, deploy, and release workflow for all kinds of applications. Where Terraform focuses on provisioning infrastructure, Waypoint focuses on application deployment.

It's an interesting new deployment tool. In this post, we are going to take waypoint for a spin and see what it is like to use it.

Before we can dive into waypoint, we need to have a few things set up. First, we are going to use Terraform to create our container image repository and ECS cluster in AWS. So make sure you have terraform configured, see these docs for details.

Finally, we need to install waypoint. This can be done a number of ways as these docs mention. If you're on a Mac, you can run these two commands in brew to get it installed.

Setting up our Next.js demo application

Before we can focus on deployment, we need an actual application to deploy. Let's create a sample Next.js application that we can deploy via Waypoint.

If we go into the waypoint-demo directory and run yarn dev we should have a functioning demo Next.js application living at localhost:3000.

Setting up our Terraform & Waypoint structure

With our prerequisites out of the way and a demo application to deploy, let's set up our configuration for Terraform and Waypoint. From the waypoint-demo directory, run the init command via waypoint.

Awesome, we should now see a waypoint.hcl file inside of our waypoint-demo directory.

Waypoint also makes use of a server that you run locally in order for the CLI and GUI to work. This is a bit clunky at the moment but we need to do the following two things to run the Waypoint server locally.

Next up, we need a directory to hold our Terraform configuration and state. Create a new folder in waypoint-demo called infrastructure and add a file called versions.tf.

Great, we now have a place to land both our Waypoint and Terraform configuration.

Creating our infrastructure with Terraform

To do that we first need to provision a new ECS cluster in our AWS account. So we are going to add the following to our versions.tf file inside of our infrastructure folder.

This will use the AWS provider in Terraform to provision a new ECS cluster in our account with the name waypoint-nextjs-cluster. Let's go ahead and run terraform apply to provision our cluster.

💪 We now have our AWS ECS cluster that we are going to run our application in. Next up we need a container image registry for Waypoint to publish to. We can use AWS Elastic Container Registry (ECR) for that.

We can add an ECR resource to our Terraform configuration in versions.tf. Add the following resource to the bottom of that file.

We can run terraform apply one more time to create our image repository.

Using Waypoint to deploy our application

Now that we have the AWS resources we need to run our Next.js app, let's deploy it using Waypoint!

To leverage waypoint we need to add our configuration to waypoint.hcl. We are going to focus on building our Next.js app as a container image and deploying it to our running ECS cluster.

Let's go ahead and add the following to our waypoint.hcl file.

What in the world are we doing here?

First, we define an app for Waypoint, next-ecs. Inside of our app, we then define a build step and a deploy step. With our build step we are making use of Cloud Native Buildpacks plugin via the use "pack" {} block. This is in favor of using Docker, but Docker is supported inside of Waypoint as well. We then define our registry block. This is used by the build step in Waypoint to push the built container image to a remote repository. This remote repository is the ECR repository we provisioned via Terraform.

Now that we understand what is going on, let's deploy it. We first need to initialize Waypoint and then we can run the up command.

After running up we should be able to hit the Release URL provided by Waypoint to see our running application. 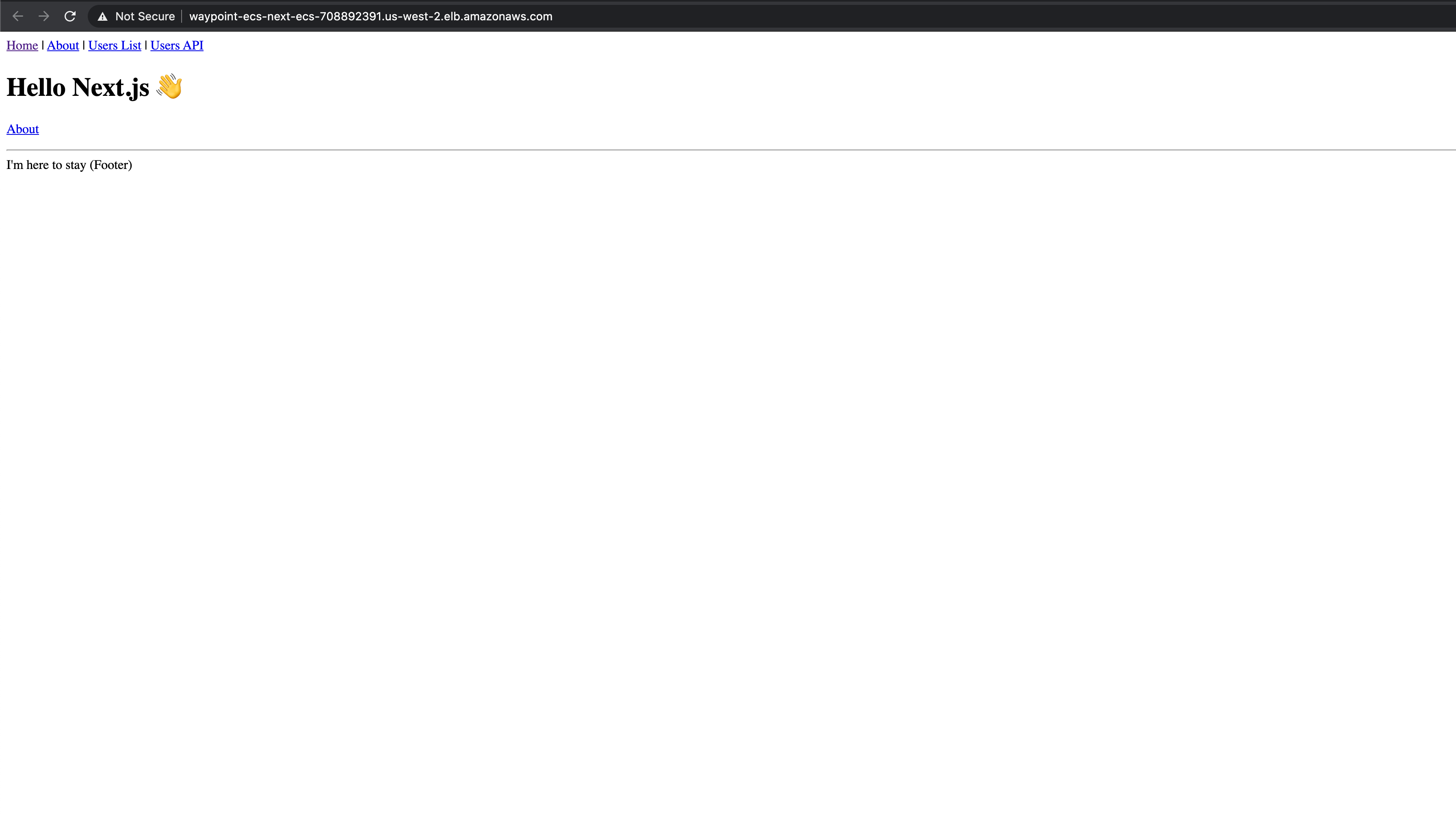 Now that we have things running and we know how to get a Next.js running in AWS via Waypoint, let's clean up all our resources. This is important to do so that we avoid spending unnecessary $$$ for a simple demo such as this.

To clean everything up we need to run two commands, one for Terraform and one for Waypoint.

First, we run waypoint destroy to clean up all our app related resources. Waypoint will remove the service that got created inside of the ECS cluster and nothing else.

Then we need to run terraform destroy from our infrastructure folder. This removes the ECS cluster and ECR repository that we created earlier.

In this post, we took Waypoint through a quick shakedown. We provisioned our infrastructure via Terraform. Then via a quick waypoint.hcl file we were able to deploy our application. Next.js was one example of an application that we can deploy but the options are rather limitless either.

We could define a Java application and deploy that as a container. We could deploy our applications to Kubernetes instead of an ECS cluster. We could build container images via Docker instead Cloud Native Buildpacks.

The moral of the story is that Waypoint is leaving the door open for flexibility. You can use any application or underlying infrastructure with it, in theory.

It's early days for Waypoint (it did just get released this week with a 0.1.1 release). That means there are some rough edges.

For instance, while writing this blog post I noticed that Waypoint did not work with existing ECS clusters even though the documentation said it did.

In theory, Waypoint will support any type of application or underlying infrastructure. In its current form, that's not quite true. There are only a small handful of plugins for building and deploying applications. So things are a bit limited.

But, Waypoint is built on the same plugin concept as Terraform. This means that 3rd party providers will be able to create their own plugins for Waypoint. So if providers add their plugins, you will be able to deploy any application to any underlying infrastructure.

As a fan of HashiCorp offerings, I am excited to see what Waypoint holds for the future. There are many ways to deploy your applications today to wherever your compute lives. Waypoint is interesting. It is providing an opinionated approach that looks to provide structure while also leaving room for flexibility.